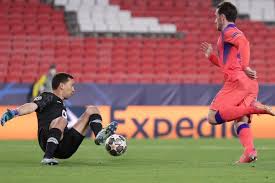 The Blues took a giant step towards reaching the last four of the Champions League last night by clinching a 2-0 victory in their quarter-final first leg against Porto.

Chelsea had very much done a job on Porto as the final whistle approached in Seville. Thomas Tuchel's side hadn't been effervescent but they had been effective, scoring through Mason Mount with their only meaningful shot on target.

With an away goal on the board, the Blues would've been confident of their chances going into the second leg next week. But then it got a whole lot better.

There was little danger to the Porto defence when Mateo Kovacic lofted a hopeful pass forward with five minutes to play. Jesus Corona should've dealt with the ball with ease. Instead, his touch was loose and suddenly there was Ben Chilwell.

With just two touches, the 24-year-old broke into the Porto penalty area and was one-on-one with Agustin Marchesín. It was a moment for composure and the England defender delivered. Chilwell swivelled his hips, took the ball around Marchesín and tapped home into an empty net.

In an instant, countless Chelsea fans were transported back to 2012 as Chilwell's finish was eerily reminiscent of the one produced by Fernando Torres against Barcelona at the Camp Nou.

The Spaniard's famous goal that night secured the Blues' place in the 2012 Champions League final, which, of course, Chelsea went onto win.

Chilwell's strike doesn't quite have the same ramifications as that of Torres. But it has put the Blues on the cusp of their first Champions League semi-finals since 2014.